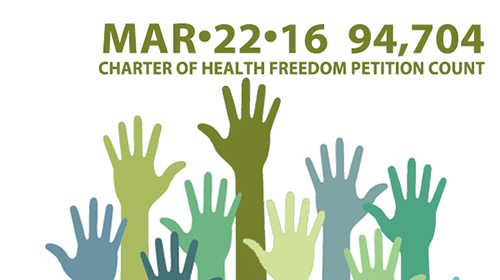 THE LATEST NUMBER OF CANADIANS SUPPORTING THE CHARTER OF HEALTH FREEDOM BY SIGNING ITS PETITION IN A SHOW OF SOLIDARITY STANDS AT 94,704.

With huge thanks to Tanyce Smith of the online health food store Natural Nutrition for celebrating the new year by sending us 389 signatures in January. Thank you to all Canadian stores, practitioners and citizens who have continued to mail in petition sheets over time. You have absolutely been counted!

This goal is in sight. 1,361 signatures is just 55 more petition sheets. If every store and practitioner who has already sent us some signatures could manage one more sheet, we’d leave this goal in the dust and march to Ottawa with over 100,000 names.

2016 is the year when this massive expression of public demand for heath freedom will make its way to Ottawa. With the landslide election we have a majority Liberal government who have pledged to listen to Canadians. Now, will they? Email us if you have have a Liberal MP who you think may be able to see the past and future implications of the NHP Regulations so we can arrange them to connect with Shawn Buckley, directly. The Charter of Health Freedom would be a government spending bill and requires an MP from the party in power to bring it to the House of Commons.

If ever there was a time to take the second largest petition in Canadian history to the House of Commons, it is now. And we are almost there. When we pass 96,065 individual Canadians who have signed their support for health freedom we will be presenting the largest federal petition since government records began, 25 years ago. This will be second only to the petition which led to our Bill of Rights in 1949.

This spring and summer we are on a final drive to collect the signatures we need to make history and you can help. Does your regular health food store have a petition sheet for its customers? Does your practitioner keep one for clients or patients to sign? You can download copies here. Plus helpful advice for keeping the petition valid and acceptable to Parliament.

People sometimes ask us whether the Charter of Health Freedom is as relevant today as it was when this campaign began eight years ago. The NHP Regulations have passed, and the world has moved on to e-petitions. Our answer is a resounding ‘yes, more not than ever before.’ Here’s why:

It’s time for the final drive, after almost ten years of work by activists like you.