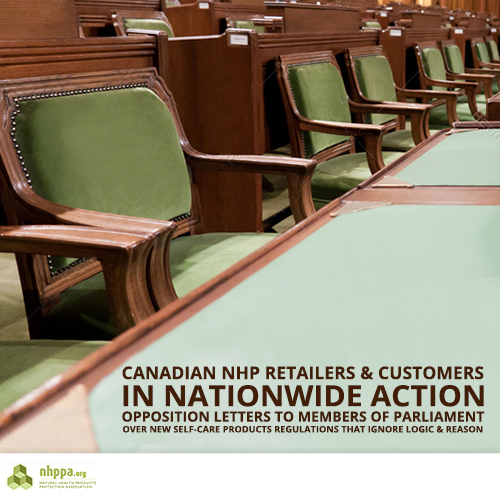 Citizens for Choice in Health Care (CCHC) is a non-profit association based in Alberta whose primary goal is to advocate for the integration of complementary therapies as an accepted part of traditional medical practice. NHPPA endorses their work. On April 29, 2017, CCHC published a provocative article that sheds light on the hidden agenda for proposed “modernization” of Health Canada’s regulations on natural health products.

As a follow up, CCHC has launched an initiative for natural health product retailers across the country to have their customers take action. The campaign asks Canadians to write to their local MP and demand that they prevent the enactment of Health Canada’s proposed new NHP regulations. NHPPA encourages retailers and consumers to participate. Many of Canada’s MPs are newly elected and are not aware of Health Canada’s history to restrict access to NHPs and limit Canadians’ freedom of choice. These actions target how we identify ourselves and undermine our pursuit to live according to natural health principles. CCHC’s campaign is critical to making your voice heard by making all MPs aware of the unconstitutional nature of Health Canada’s plans.

Take part in this national initiative

It is likely that Health Canada’s new NHP regulations will come into law simply by being published twice in the Canada Gazette as an amendment to the Food and Drug Regulations. This means that there will be no parliamentary process. We are asking all NHP advocates to help monitor the Canada Gazette by using search terms such as “natural health products”, “self-care” or “Food and Drug Regulations”