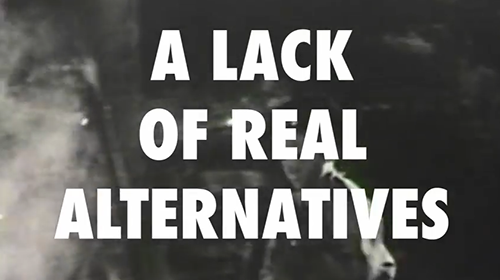 This short film (5:21 minute watch), “Why Don’t People Revolt”, by Theory and Practice, a UK-based independent political awareness project, breaks down the three core reasons why people accept their “lot in life” and don’t revolt; incentives and disincentives, a lack of real alternatives and false consciousness.

Three (of many) powerful quotes from the video will resonate with advocates and activists. We want to see change that aligns with our world view. But often society has difficultly taking action against even known corrupt authorities. It is not without good reason.

“A lack of real alternatives – this may be objective or it may be subjective. Objectively, an absence of effective platforms for dissent, such as social movements, trade unions, political organizations, etc., rendered near powerless those who seek to resist. Subjectively, people may simply be unaware that there are alternatives outside of the way things are at present. They grow accustomed to their way of life and their social position. Submissions and lack of willful change become ingrained through force of habit. Over the generations patterns of behaviour become naturalized and knowledge of alternative fades”.

“For the exploited to effectively kick back against the exploiters, it is a question of building organizations that can be used as vehicles for dissent and of questioning the assumptions behind the ideas that support the interests of the powerful against the powerless”.

“Many are mistaken or misled about where their true interests lie. An individual’s values, what they think is valid, realistic or fair, will be shaped to a lesser or greater degree by the values that are dominant in their society.”

The right to treat your health naturally and maintain sovereignty over your own body is under threat through Health Canada’s latest proposed regulations on NHPs. NHPPA has developed an alternative called the Charter of Health Freedom that works to support and enable Canadians to dissent against and question the government’s exertion of power when it comes to choice in healthcare.

NHPPA only exists through the generosity of our supporters. If you like our work, support us by donating today.

Learn more about the Charter of Health Freedom with interactive video explanations of each section by Shawn Buckley.

The Charter of Health Freedom petition is almost at its goal of 100,000 signatures. Help us get there by downloading a copy of the petition, collecting signatures, and mailing your completed petition to us.