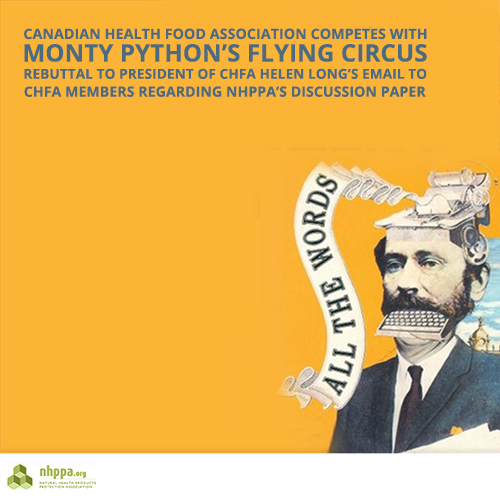 On May 10, 2018, the NHPPA released a Discussion Paper explaining the issues behind the upcoming repeal of the Natural Health Products Regulations. The CHFA responded by sending an email to its members implying the Discussion Paper was based on dated and inaccurate information. In response, Shawn Buckley wrote an opinion piece that in effect compares the CHFA to surrealist comedy when it comes to drug regulation policy. After challenging the Helen Long on a number of points, Mr. Buckley concludes: “In my opinion, the proposed changes are so detrimental to all CHFA Members that the attack on the NHPPA Discussion Paper must be a piece of comedy rather than a reasoned analysis. It is difficult to say whether the CHFA or Monty Python’s Flying Circus will win this year’s comedy award, but the CHFA is off to a strong start.”