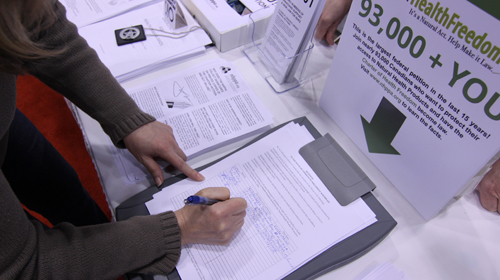 The Charter petition topped 93,000 signatures by lunchtime on Saturday April 5—the second day of the Total Health show. By the end of the weekend, we had reached 93,236.

We need only 2829 more signatures to become equal to the largest Federal petition to be delivered to Parliament, in one single submission, since April 27, 1999. We consulted Ottawa’s Clerk of Petitions for figures on the largest Canadian Federal petitions. Parliament’s searchable archives go back 25 years. It is possible then, that when we reach our next milestone, of over 100,000 signatures, the Charter of Health Freedom will be on record, as second only to the Bill of Rights in public support!

We’ve just received Shawn’s lecture video from the April 4-6 weekend and are prepping it to upload to YouTube.

In the meantime we have compiled a photo gallery and show report for you.