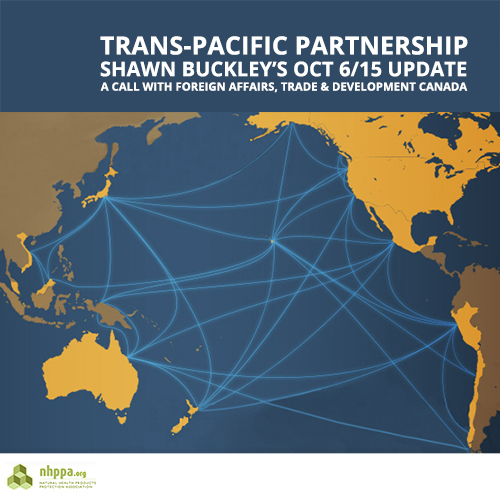 YESTERDAY MORNING THE NEWS REPORTED THAT A DEAL WAS REACHED ON THE TRANS-PACIFIC PARTNERSHIP OR “TPP”.

Like the Comprehensive Economic Trade Agreement (“CETA”) that was negotiated with the European Union, the TPP talks have been ongoing for some time. Also like CETA, the text of the agreement has been kept secret.

For people that follow the alternative media, there have been reports of concern over the TPP over-riding national sovereignty on trade disputes. We at the NHPPA cannot speak to this, the text still being kept secret. Nor can we speak to whether the TPP will have an effect on Natural Health Products. What we can say is that we are concerned and will examine the agreement once text is released. This could be some time.

With the announcement of an agreement, Mr. Shawn Buckley on behalf of the NHPPA participated in a conference call hosted by Foreign Affairs, Trade and Development Canada on October 5, 2015. Speaking was Kristen Hillman, Canada’s chief negotiator, and two Ministers. The first part of the conference was prepared statements which were not helpful. All participants were limited to one question. Mr. Buckley was able to ask the first question to Ms. Hillman. Mr. Buckley’s question concerned whether foreign companies would have to comply with our Natural Health Products Regulations to be able to sell in Canada under the TPP (as otherwise it would be unfair for Canadian companies which must comply). Ms. Hillman replied that any product will be required to comply with our regulations.

On the face of it, the answer is reassuring. We cannot know, however, without reading the actual agreement, whether we should be reassured. We will keep you posted once the agreement is released.