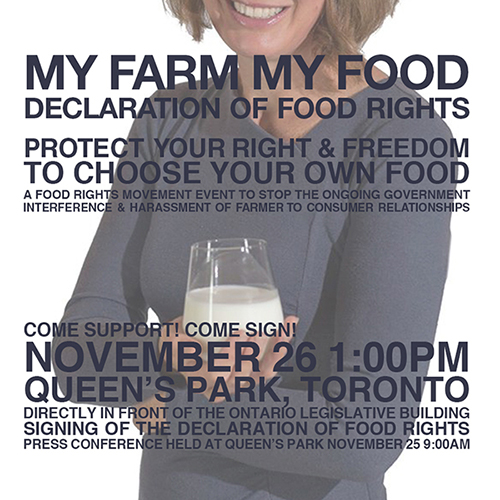 WHAT STARTED AS A RAW MILK DEBATE HAS MORPHED INTO A BOLD EXAMPLE OF THE FOOD RIGHTS MOVEMENT.

Two decades of tension for a small group of farmers and their families, going about wanting to feed themselves, has to end.

On October 2, 2015 in a public display of solidarity, farm owners stopped government agencies from taking their food off their property. NHPPA posted that and received more “likes” and “shares” than any other post over the last year. It was a direct citizen action that spoke to all of us.

In the 21 years the farm has been producing raw milk for a private co-operative, this is the 3rd time they’ve been aggressively investigated. Years of court battles, threatening enforcement and disproportionately harsh tactics by authorities have been a part of their lives. Since the October 2 raid, farm owners have been asking for a dialogue with authorities involved to stop the harassment and threat of losing access to their food. No-one was willing to talk to them and five of them have since been charged. Last month they decided to began writing, emailing and calling Ontario’s Premier, Kathleen Wynne. She also rejected their request for a meeting saying that, “as this matter remains under investigation, it would be inappropriate for me, as Premier, to comment on this issue.” The position of York Region Public Health is that the Durham, Ontario farm owners are “distributing raw milk” which is not permitted under the Health Protection and Promotion Act. The position of the farm owners is that they are not “distributing” raw milk. Food from Glencolton Farms is not available to the public. They hold the opinion that they are producing and consuming raw milk completely within the rights they enjoy in Ontario.

If you support the rights of people to make their own food choices, without interference from the government, we want to see you at Queen’s Park on November 26, 2015 at 1:00 pm!

Like NHPPA’s battle with protecting your access to natural health products, practices and practitioners, it doesn’t matter if you don’t think people should consume dairy or if you think raw milk is unsafe. No-one is stopping you from accessing regulated commercial products and compounds with known dangers. No-one should be stopping you from choosing the food you want to consume. Even international raw and superfood guru David Wolfe posted a video in support of the effort.

This event is not about a difference of opinion in food ideologies but about the overarching principle of personal choice.

My Farm My Food is an inclusive philosophy.

The Declaration of Food Rights will be unveiled in a unique way with room for your signature beside many local chefs, natural health professionals, food rights activists and consumers who want to connect with farmers to procure the products they want.

Join us to send a message that, as informed, competent people, you will not be intimidated or silenced into having anyone but YOU decide for yourself. Help represent this movement, and your inherent right, in a powerful way.

This event tells bureaucrats to stay away from our private property, out of our gardens and out of our kitchens.

Masha is the woman in the image. She is a teacher and one of the many farm owners who has had access to the food of her choice for over a decade. She and others like her, are now in “total non-compliance” to government agencies’ perceived authority, just to get their milk.

Arrive at 1:00 pm and bring signs that read, “My Farm My Food”, “I will choose what I eat, not the government “, “Stop harassing farmers and consumers” or whatever else you’re inspired to write!

The event will take place outside, directly in front of, the Ontario Legislative Building. Come early to find parking! Dress warm and bring a thermos of hot chocolate! Take pictures, post and spread the message to become engaged! Hear Michael Schmidt and the farm owners share their unbelievable story and leave you inspired to act!

Important links with information leading up the event:

Michael Schmidt’s Facebook. All posts are shared with the public. A candid, personal perspective from Michael.

Recent radio interview with (farm share owner) Phil is a great perspective as to why this co-operative’s success is a cornerstone in the food rights movement.

The Bovine: A comprehensive blog about rights issues around access to raw milk.

Examples of interference under inconsistent regulations and policies:

(British Columbia) A couple fights for the right to grow food on their residential property. The couple was ordered to “cease all agricultural activity” after an initial complaint about having manure on the property. (2010)

(Michigan) Michigan mom charged with misdemeanor for planting a vegetable garden in her front yard. (2011)

(Alberta) Due to city by-laws Edmonton shepherd David Koch loses his flock after having them on family land for over 20 years. (2015)

(Ontario) A local family faced an order to remove their six chickens after a neighbour filed a complaint. The family’s request to raise backyard chickens for a one-year trial period was denied despite having kept chickens for eggs on the property for two and a half years. (2014)