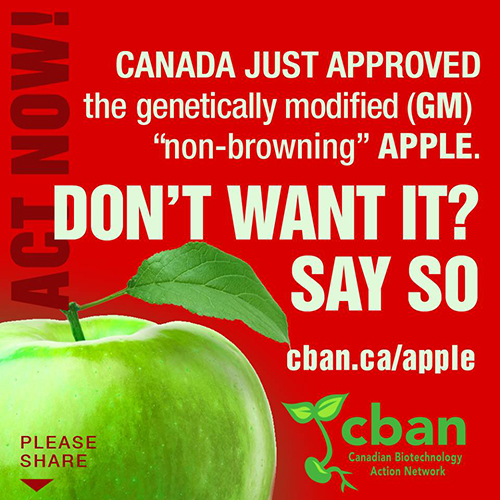 SUSTAINED EFFORT BRINGS ABOUT CHANGE. EVEN IN THE FACE OF BEING SEEMINGLY IGNORED, THE CANADIAN BIOTECHNOLOGY ACTION NETWORK (CBAN) WILL NOT BACK DOWN.

NHPPA can relate with objectives taking time! They have our unwavering support. Intrexon, a leader in synthetic biology, that acquired Canada’s Okanagan Specialty Fruits, successfully had their “Arctic Apple” approved by Health Canada and the CFIA. After 3+ years of continuous effort, on March 20, 2015 news of Canada approving the growing of GM “non-browning” apples incites a new CBAN action.

The fruit is to enter our markets as early as next year. Will your grocery store sell the GM “non-browning apple? Write to the head office of your grocery chain store today to find out. The GM apple has been approved but that doesn’t mean it has to make it to the market. Join CBAN’s astute next step to have your buying power support denouncing this federal decision.

How to keep cut apples from browning: http://tiny.cc/cj7bwx