Melody Byblow and Julia Rickert complete the NHPPA booth set up and are ready for a freedom fighting weekend! 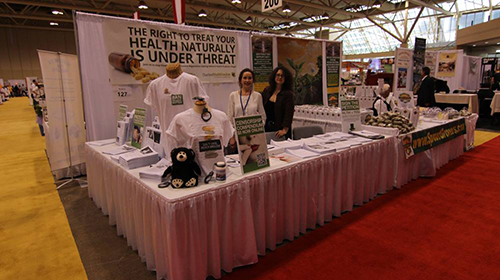 Our popular and new material for this year’s show included a full MPP package to stop an injunction that may be the end of cow share and farm share schemes such as Michael Schmidt’s, and thus the end of raw milk farmers in Ontario. The injunction seeks to remove consumers’ rights to be part of private raw milk cooperatives. NHPPA compiled new selections of articles on: illegal surveillance of Michael Schmidt’s property and the sheep napping drama. We also supplied reports from the days’ events on the Alberta meningitis court case (death of Ezeikel Stephen) that you won’t find in the media. 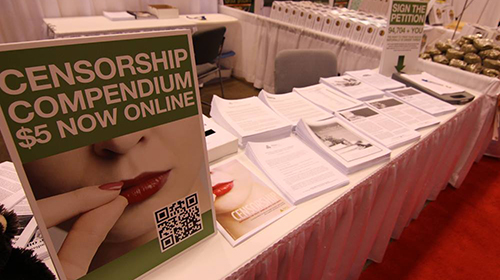 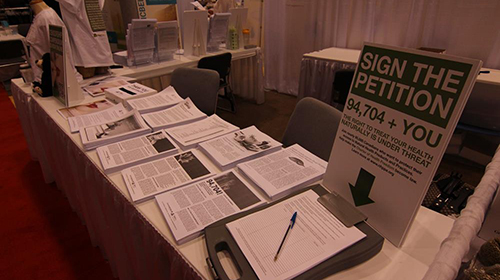 Takeaway copies of our informational materials both old and new. And plenty of blank petition pages, ready to kick off the final year of gathering signatures for the Charter of Health Freedom petition. 2016 will be the year of delivery to Parliament. 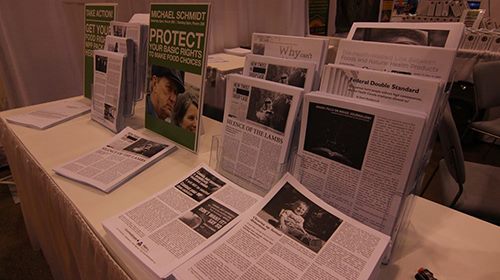 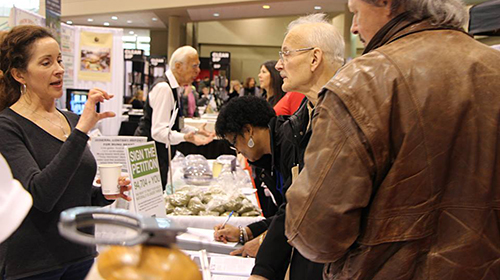 The petition grows! Every year we are surprised by how many people line up to add their voice. This is the year we plan to take the petition to Parliament. 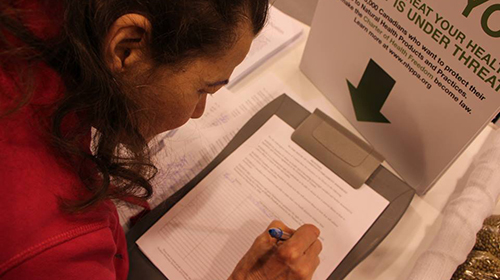 Julia Rickert sharing how our individual natural treatment options would be honoured under the Charter of Health Freedom. 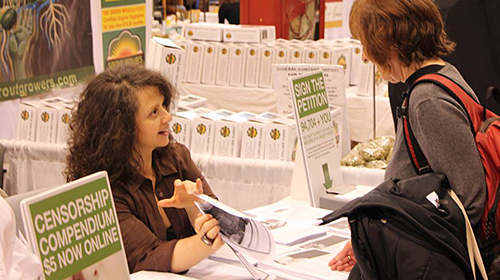 The Total Health Show always offers NHPPA a fantastic outreach forum for people joining the natural health community. This year we spoke with many newcomers to the problems caused by the NHP Regulations. Often, at these trade shows, we spend time exchanging experiences with industry stakeholders, the first to feel the consequences of unreasonable regulation. This year, we met practitioners, such as naturopaths, whose work is now becoming hampered by the non-availability of safe and effective products. 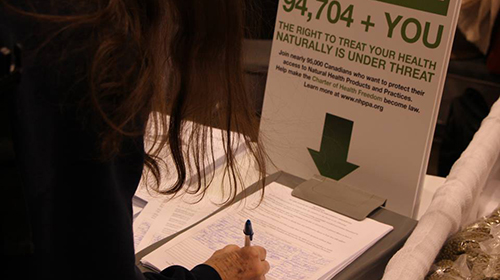 Our NHPPA T-Shirts are designed to be conversation starters. This year, our Ban Peanut Butter shirt stopped more people than any other. It was a perfect way to explore how banning peanut butter makes more sense than removing safe and effective natural health products from the market. 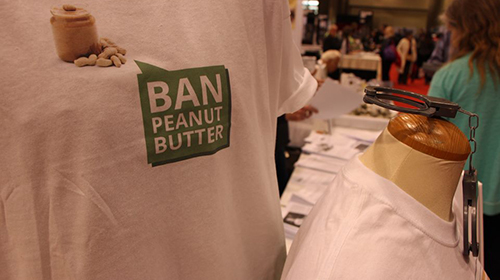 Yes, we’d save more lives with a Peanut Butter Directorate. 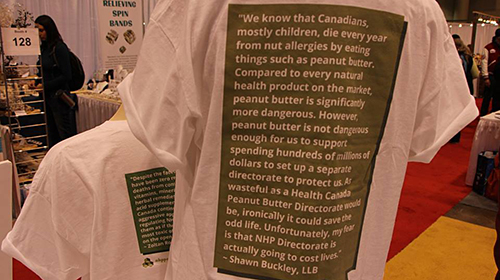 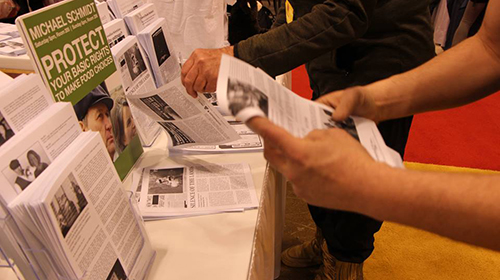 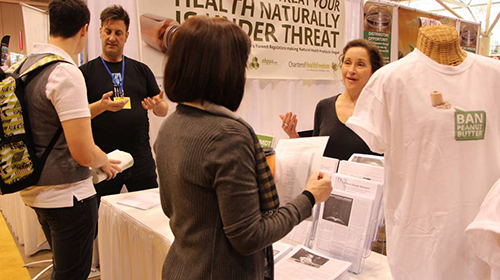 Our booth reached more people than ever this year, with many people stopping by to chat for the first time, about their experiences of losing access to favourite natural products. 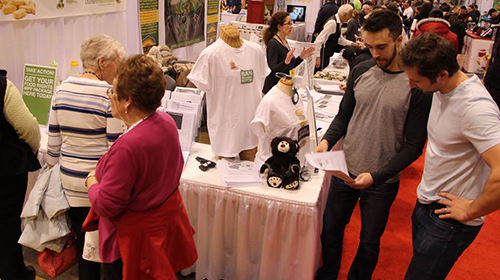 Raymond Emes worked to have NHPPA run out of MPP packages in support of regulating private raw milk cooperatives in Ontario. If you’d like to support food freedom and Michael Schmidt’s fight to stay in business, and regulate, rather than ban raw milk, our MPP information package will be online shortly for you to download and mail. 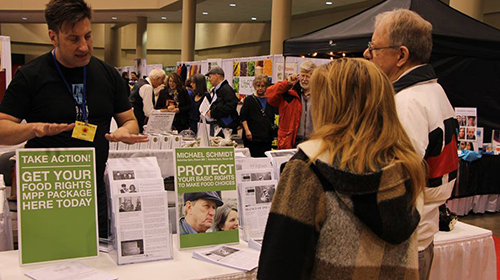 Michael arrives at the NHPPA booth after his 5:00 pm lecture! 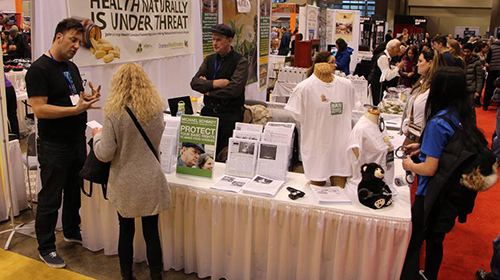 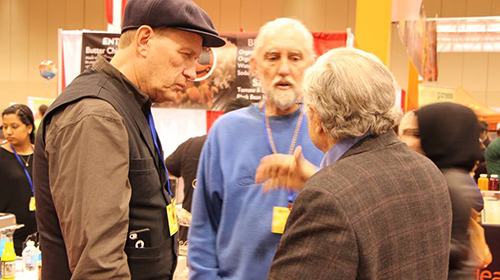 Adjusting for the group shot after a long but rewarding day. 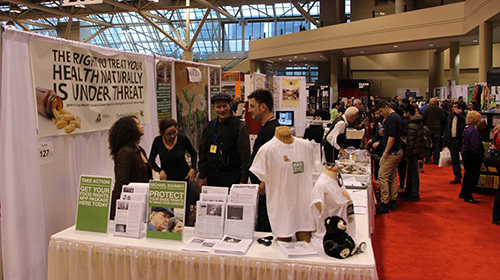 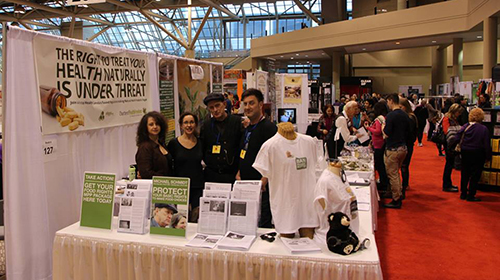 Melody Byblow and Wendy Fasken start their final 9 hour day (and loving it) at the show.

Melody says: “It was great to engage in conversation with so many people who were interested in educating their MPs and others. Many health practitioners stopped by too, like the Naturopathic Doctor in this picture, who was interested in setting up a Petition Station at her clinic. She’ll download the petition kit and a few articles to keep on hand to help educate patients on the importance of the issues and to get more signatures for the Charter of Health Freedom petition.” 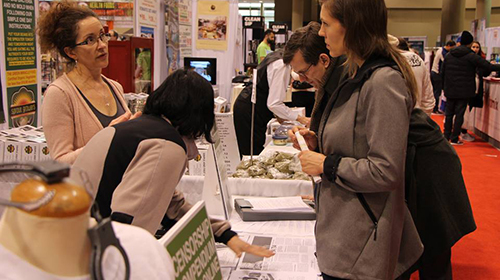 Closing in on 350 signatures. We felt a bit of a record number of new signatories for a single weekend coming on… 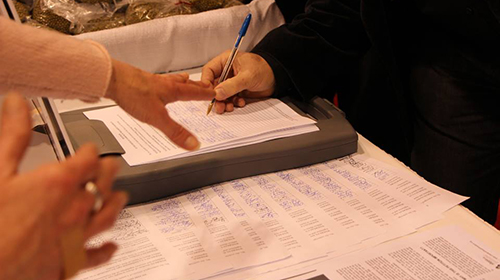 Julia Rickert sharing why the Charter of Health Freedom is still relevant in 2016 and why the petition is in print and not online: you can download this information here if you’d like to explain it to your networks. 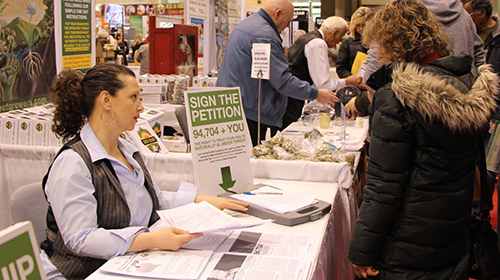 NHPPA booth visitors learning for the first time what the NHP regulations mean. Melody discussing Shawn’s 2014 “Safe or Unsafe” article in Alive magazine and the controversy it started. 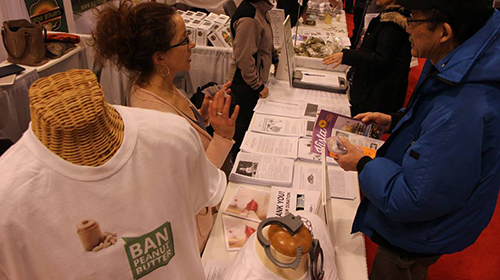 Karen Selick holds up her published rebuttal “Clearing up factual distortions“  to a National Post article, “When naturopathy kills.“

The content is about the Alberta parents who’ve been charged with failing to provide the necessaries of life to their son Ezekiel, who died in 2012 of meningitis. Visit Stand4Truth for details on the daily happenings in the courtroom and informed opinion on the proceedings. 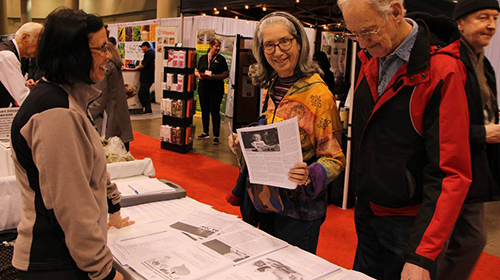 The NHPPA team arrived to find “pop-up Michael” in the booth. 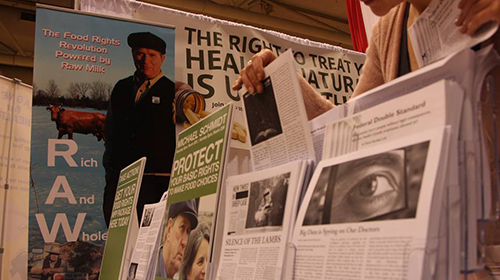 Our new publications sat beside the most popular articles from last year: “Silence of the Lambs” by Montana Jones and  “Magic Pills or Magic Journalism?” by Shawn Buckley. 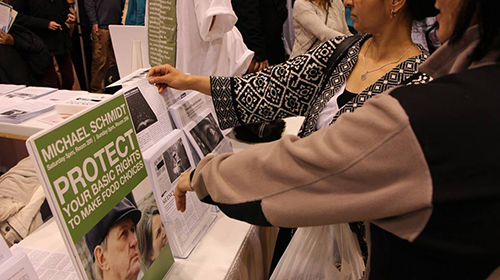 It’s taken time to get the word out, beyond those in the industry, about Health Canada’s onerous regulations around natural health products. Closing in on 400 new signatures. 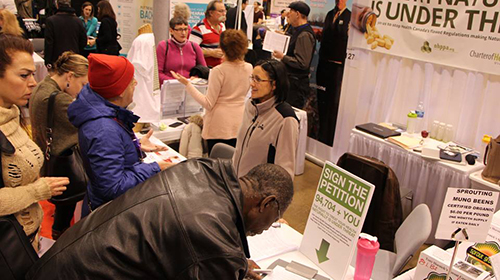 Showing Karen Selick her page in NHPPA’s Censorship Compendium. Our powerful fundraising publication is available online for $5 until end of May. 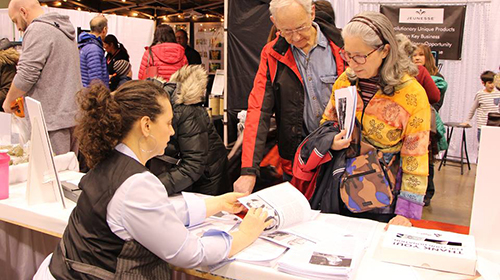 Michael Schmidt lectured both Saturday and Sunday on his battles with government surveillance, the criminal charges brought against him in the sheep napping case and, of course, raw milk. Learn more at his blog, The Bovine. 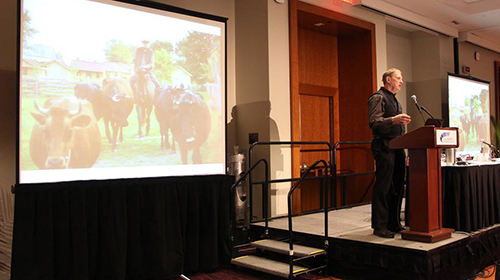 Michael’s message isn’t easy to hear. Food rights, as well at natural health rights, are being eroded day by day. His lectures were well-attended, always a sign that the word is getting out. 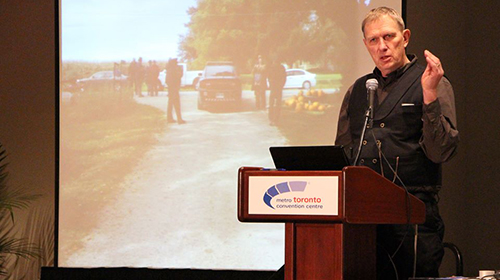 Michael Schmidt, Julia Rickert, Melody Byblow and Wendy Fasken close out NHPPA’s 2016 Total Health Show presence, where we met more of you than ever, distributed an entirely new MPP campaign to secure food rights in Ontario, and collected a record number of petition signatures for a single weekend. The Charter of Health Freedom Petition is now under a thousand voices away from being the 2nd largest federal paper petition in Canadian history. 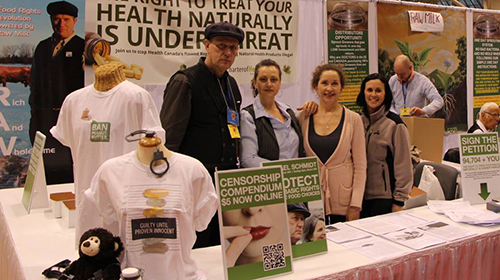