Investigative Fact or Bias? | A User’s Guide to Cheating Death 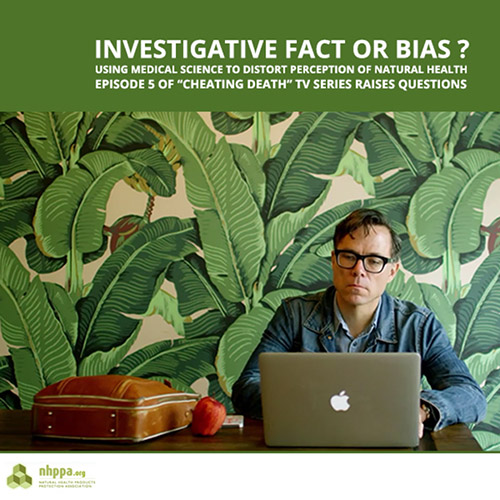 On October 12, 2017 VisionTV published an interview (4 minute read), with Canadian lawyer, health law professor, writer and “debunker-extraordinaire” Timothy Caulfield about his new 6-part documentary series titled “A User’s Guide to Cheating Death”. The interview titled “Tim Talks Natural Remedies and Foods”, touches on why Mr. Caulfield chose to address natural foods and NHPs as part of the series, what he has gleaned from his research and the blowback he has received from supporters.

NHPPA watched Episode #5 of the series, “The Natural Way”. The episode focuses on natural nutrition, holistic health practices and NHPs. Initially, it seems that Caulfield is impartial in his approach to cover the issues surrounding natural health vs conventional medicine. It doesn’t take long for it to become clear that the intent is to discredit. Featured experts are cherry-picked to cast doubt and mock the natural health industry and those who support it. On cue, and as expected, positions include “there is no science to support natural treatments and products”.

Choose any one of many persistent hardline statements seemingly meant to provoke a controversy-for-ratings thread and discuss. There is plenty to undo as a member of the public and as a professional in the natural health field. Not surprisingly, NHPs are villainized. Ubaka Ogbugu, Professor of Law and Pharmaceutical Sciences with the University of Alberta states that there is no regulation and no requirement for clinical studies for NHPs. We are unsure if he is familiar with Health Canada’s NNHPD. He further states, “These guys (NHP manufacturers) are making money off of selling bunk to the public under the label of Natural.” This is a remarkable generalization for a man of law and science, where context is everything. Not very responsible in messaging for accuracy or truth.

While we have not viewed every episode of Caulfield’s documentary series, “The Natural Way” is clearly weighed heavily in favour of following published medical science. The trouble with this kind of science, unlike mathematics or physics, is that it is not pure. Environments for research may be degraded by many factors influencing outcomes in the biological and health sciences. Caulfield states, “Anecdotal experiences, no matter how compelling, should not be given the same weight as science-based analysis, especially when discussing serious diseases”.

Conversely, NHPPA’s 2015 Censorship Compendium features an article written by Shawn Buckley titled, “Suppressing the Truth, What You are Not Allowed to Know”, which addresses, among other things, how doctors do not put much weight on expensive clinical trials on drugs, and often prescribe based on anecdotal evidence.

Is following the peer-reviewed medical science really all that reliable? In 2015, Dr. Peter Rost, former VP of Pfizer, blew the whistle on the influence of the pharmaceutical industry on medical science in the “One More Girl” documentary.

Alan Levinovitz, Author of “The Gluten Lie”, further discredits NHPs, claiming that they often put the word “bio” on their packaging or in the product names because, “They’re trying to put the “bi” back in biology because they’re selling products that ultimately aren’t doing what they claim. In 2014, Genevieve Eliany, wrote a piece, “The Health-Washed Line Between Foods and Natural Health Products” that speaks to the discrepancies in the permitted health claims between food and NHPs

“No matter how much talk you hear about the natural solutions to these complex health problems, most people are smart enough to know that you go by the evidence. It’s people who make those decisions. People can be smart or not so smart.” says Joe Schwartz, PhD, Director – Office of Science and Society, McGill University. To this point, NHPPA encourages and promotes education. Keep reading and comparing new and evolving research from both mainstream and alternative medicine. There is validity in both, if it works for you. Ultimately, the choice needs to be yours. The Charter of Health Freedom is the best way to protect your right to that choice.