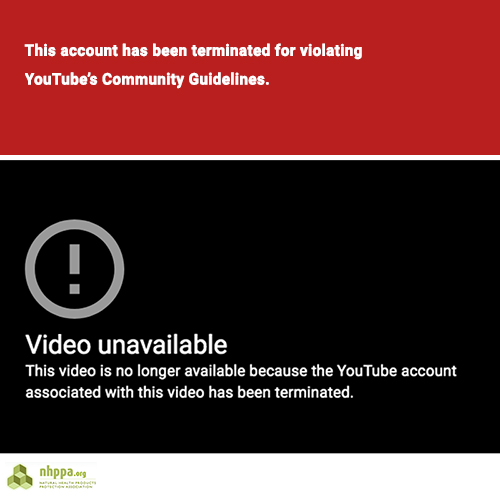 This is a video interview that we wanted to share with those who are motivated to understand what changes are coming to the Self-Care Framework this year, and how they threaten access to natural health products.

In late April, just as NHPPA finalized our materials to share with you
—ThatChannel’s YouTube channel was removed from the platform.

Hugh Reilly is the founder of ThatChannel, an alternative media studio, founded in 2004. Since NHPPA’s inception in 2008, Hugh has engaged with our mission and interviewed Shawn Buckley nearly every year regarding changes to Canadian regulation of natural health products and our campaign goals. He has dependably provided a stage to educate the Canadian public and amplify NHPPA’s voice.

Despite our continued phone calls, emails, and social media messages to attempt to contact Hugh and ThatChannel to offer our support, we’ve been unable to reach them. It is understandable. He is likely under a considerable amount of duress since having his life’s work compromised without warning. Egregious censorship has been increasing exponentially across most popular social media platforms, and the deletion of ThatChannel is no exception.

We know there are a number of Hugh’s fans who follow NHPPA. We welcome any of you who may have information about ThatChannel or how to contact Hugh Reilly, to contact us with the details.

Until ThatChannel can be restored or rebuilt, we were able to transcribe a few quotes we would still like to share with you:

• “Now here’s what your listeners have to be aware of… This whole ‘game’ is a fraud. This drug approval process, like when Health Canada says you can’t take Strauss Heart Drops because they haven’t been proven to us to work for heart disease, it’s a fraud.” (11:11)

• “[This psychiatrist] starts complaining to me when I’m cross examining him about how hard it is to get a new antidepressant through this new drug approval process. He says, you know, ‘We need two clinical trials, so right out of the gate, we run eight. We start with eight. Because we have to run eight on average where there’s two that have a statistical separation.’ The other six could show the sugar pill works better than the drug, but they don’t show Health Canada the other six.” (12:00)

• “Right now, to get a traditional product approved, you can rely on traditional use evidence.” (14:16)

• “When we’re done this transition, you will have to have the same level of evidence for natural products as you have to for the [low-risk] chemical drugs, which is going to be clinical trial evidence. Well, natural health products will never go through the new drug approval process, because it costs about a million dollars to go through and you have no intellectual property rights.” (18:56)

• “We all need to be really cautious about our sources, and what information we accept and don’t accept.” (31:26)

• “I’m really frustrated with how hard it is to get people to actually do anything, even if they totally agree with you. Somehow picking up that phone, because it’s uncomfortable, or writing that letter, it’s just hard to motivate people.” (32:35)