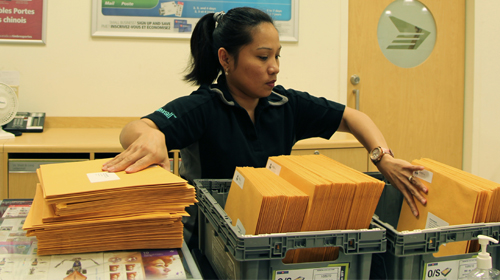 Through citizen involvement, 89 Charter to 308 packages were delivered to 67 ridings around Canada. Thank you to everyone who took the time to participate!

You can see how many MPs were sent this vital information about The Charter of Health Freedom during the campaign by reviewing out Charter to 308 Riding Chart.

You can see copies of the letters our citizens received as responses from their MPs here.

Every MP needs, and deserves to know the truth. In order for this campaign to maintain its integrity, we needed each MP to be in possession of the information they require to put the next part of our campaign in context. This means that each MP needs to have received the Charter package.

The picture above shows the packages being sorted at Canada Post on this past long weekend, for delivery to Parliament Hill.

CHARTER OF HEALTH FREEDOM PACKAGE ON BEHALF OF CITIZENS

The NHPPA wrote on behalf of it’s subscribers who live, work and vote in the ridings who did not receive a Charter Package, and over 90,000* of their fellow citizens across the country. We introduced MPs to the issues concerning the government handing citizens constitutional right to control their own health, and that of their families to unelected officials.

As the NHPPA was sending these remaining packages on behalf of subscribers, we edited the wording of the cover page from the original that our subscribers used during the campaign.

Below is the full list of documents contained in the Charter of Health Freedom information packages sent to MPs by the NHPPA, on behalf of our subscribers:

Now that every one of the 308 ridings has received a Charter package, we are in a good position to move onto phase 2 of this campaign series. Details on this will be released by the end of July 2013.

During the last couple of weeks we have received MP’s responses to the Charter sends from citizens. We would in fact like to ask for more. Before we carry on to Step 2 of this 3-part campaign series, Shawn would like to draft and deliver an outline that will support further reply emails to MPs. Currently, we have received “form e-letters” with statements from Health Canada and the NHPD, complete with spin and data that needs to be challenged. For Shawn to get a better sense of what statistics and information he needs to address, we request that you forward all MP responses to info@nhppa.org as soon as possible. While we prepare for Step 2, Shawn will pull out the top points of various MP reply emails for everyone to build considered replies. The goal is to continue to educate our MPs so they are better informed and prepared to challenge the accuracy of what Health Canada is presenting.

Shawn will also be drafting short summary to express the validity and relevancy of the Charter of Health Freedom in a seemingly ever-shifting regulatory landscape at Health Canada.

*A petition in support of the Charter of Health Freedom currently stands at 91,667 signatures and will shortly be the largest Federal petition in 15 years.