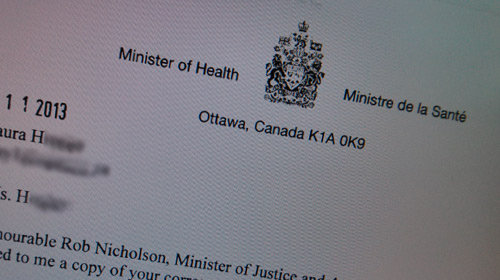 Several of NHPPA’s packages and personal letters from citizens have received responses from their MPs. We are finding that they are so similar it is clear that canned responses, in whole or in part, are the preferred way to deal with your concerns. Each reply to a package attempts to assure the recipient that they should have confidence in Health Canada’s NHPD and the decisions being made to justify the current regulations. The letters also do not address the questions or comments posed by the sender.

In order to maintain open lines of communication Shawn will be drafting a few counter arguments. We will post these when complete. You will be able to write your MP back by using one, two or all of the points per letter to support your effort in helping educate your MP. To anyone other than those of you who understand what is happening in the NHP community, any one of these letters seem reasonable. It is up to all of us to help re-define a perspective other than Health Canada’s from which MPs might be able to see things a little differently.

You can read through the MP responses below to get a sense of how they are responding to our position.

Click on the .jpg image below to open the letter. They are faxes or emails we have had to print and scan in, so please bear with the lower resolution. You can increase the image size on your computer by zooming in! 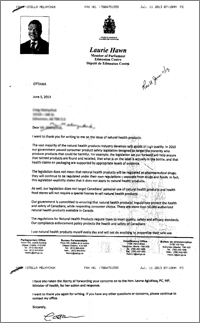 This letter comes straight from the Minister of Health Leona Aglukkaq, after Mark and Laura’s MP forwarded their letter onto her.

Leona Aglukkaq’s response focuses on the number of NHPs that have been approved, and how this far exceeds those covered by the previous government. She quotes numerous statistics, but does not address Mark and Laura’s specific concerns:

“In the first six weeks of 2013, more NHPs were approved than during the first two years of the Natural health Products Regulations under the former government.” 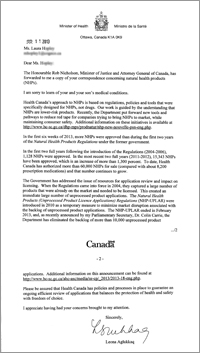 Robert Sopuck’s response to Bonnie follows the same theme of quoting statistics, and licensing procedures. he includes this superficially comforting line that we have read in many of the responses from MPs: 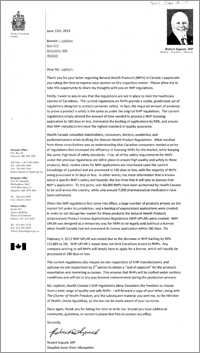 Bonita went above and beyond the call of duty and instead of only sending to her MP, she mailed far and wide. Two MPs sent her almost identical emails.

“If NHP’s were instead given their own unique category, as opposed to a subclass of “drugs”, it would be important to understand any unintended consequences this change may pose and whether or not safety and efficacy may be compromised.” 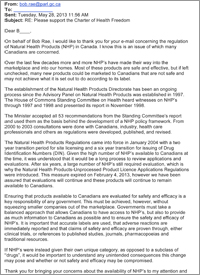 Bonita’s emails contained several paragraphs taken verbatim from the same source. Here is an example of a paragraph that appeared not only in her responses, but also in responses received by others too:

“Over the last few decades more and more NHP’s have made their way into the marketplace and into our homes. Most of these products are safe and effective, but if left unchecked, many new products could be marketed to Canadians that are not safe and may not achieve what it is set out to do according to its label.” 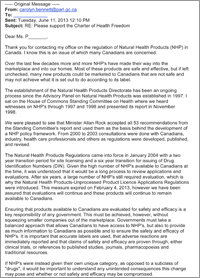 Mary’s response from her MP included much of the same information as others. Her response included full paragraphs word for word, that were also “written” by Carolyn Bennett MP and Bob Rae MP.

Another similarity between responses:

“If NHP’s were instead given their own unique category, as opposed to a subclass of “drugs”, it would be important to understand any unintended consequences this change may pose and whether or not safety and efficacy may be compromised.”

It begs the question, did Hedy Fry read the information sent to her? 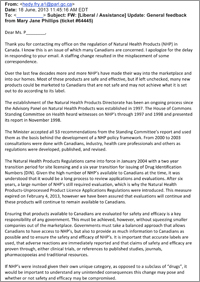 Like every other MP, Bruce Stanton talks about the safety of NHPs, how the Natural Health Product Directorate functions, and their evidence requirements:

“Although generally considered to be lower risk products, NHPs can in fact pose a serious risk to health.” 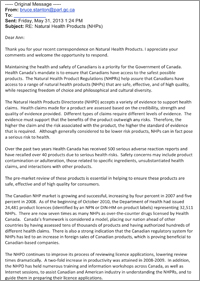 Again in Bruce’s response to Linda, we see some very familiar paragraphs that have been used by other MPs:

“Maintaining the health and safety of Canadians is a priority for the Government of Canada,” without due consideration of the impact of lowered dosages and disappearing products on the health of Canadians. 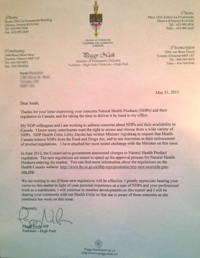 Just like the other responses, Leon Benoit, MP is keen to paint a picture of good intentions concerning the health and security of NHPs:

“As I have made clear in the past, maintaining the health and safety of Canadians is a priority for the Government of Canada. Health Canada’s mandate is to ensure that Canadians have access to the safest possible products.” 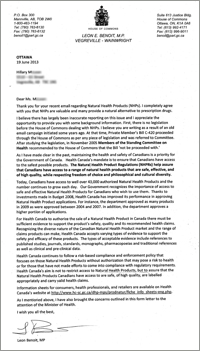 In the same vein as other MPs, Gordon O’Connor MP responded referencing the differences between the old regulatory approach, compared to todays, while not addressing the issues posed by his constituent. 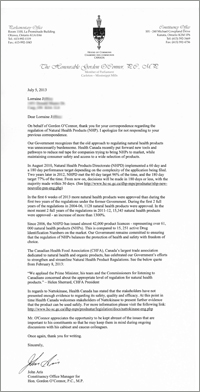 Gary Schellenberger appears to be an MP who is listening. He writes to the Health secretary advising that his constituent has “serious concerns” about the removal of NHPs and that she poses “three key questions”. He encloses a copy of the Charter of Health Freedom as well as the original letter. It will be interesting to see whether any response to this MP finally addresses the issues sidestepped above. 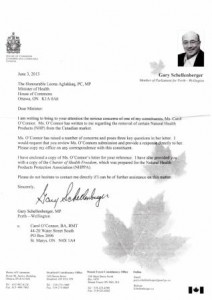 Kennedy Stewart MP sent a letter with some cut and paste, identical to the inaccurate information sent by Peggy Nash,“In June 2012, the Conservative government announced changes to Natural Health Product Regulation. The new regulations are meant to speed up the approval process for Natural Health Products entering the market.”

This is not so, no changes were made in 2012, however he does mention that many of his constituents are raising concerns about access to NHPs. He notes that Libby Davies has written to the Health Minister but seems unaware that a wholly unsatisfactory reply was received. 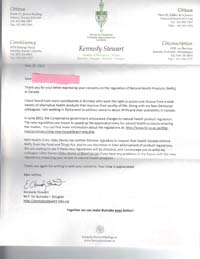 Stella Ambler MP took the trouble to write some of her reply herself, with reassuring tones that she uses natural health products herself and is a ‘strong supporter’. However she copies the figures Leona Aglukkaq uses to compare rates of licenses with the previous government and repeats the ‘removing red tape’ argument. Her platitudes are given bullet points to make them appear more meaningful, however they remain irrelevant to the questions asked.

“Our government remains committed to ensuring that the regulation of natural products protects health and safety while allowing freedom of choice.” 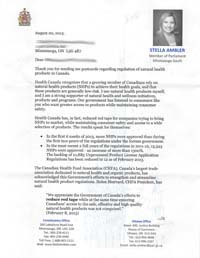 Megan Leslie’s letter conformed to the pattern of all NDP MPs. Each refers to the letter Libby Davies sent to the Health Minister, adds that changes were made to the Regulations in 2012, almost as though the NHP brought this about, and with the assumption that these changes are in some way a triumph. Every NHP MP is “waiting to see if these new regulations will be effective” regardless of the fact that there are no new regulations. 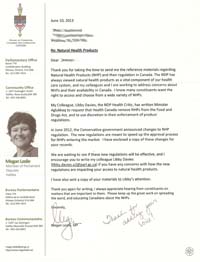 Among the usual cut and pastes we have seen time and again in the previous letters, this letter from Rick Dykstra MP includes some pasted phrases about the Charter of Health Freedom, from the information that was sent in the package. It merges this with the other platitudes as though the Charter is government policy! If ever there was a demonstration that these letters receive zero thought or consideration of the issues, this is it.

“The Charter of Health and Freedom allows access to NHPs while continuing to maintain safety for Canadians. Health Canada recently put forward new tools and pathways to reduce red tape for companies trying to bring N HPs to market while maintaining consumer safety and access to a wide selection of products. The Charter works with the Canadian government to protect the NHP and Canadian citizens. The Charter will continue to do an excellent job in protecting NHPs and most importantly the safety of people, It will also prevent from some pharmacy products taking over NHPs, which is what has happened in some European countries.” 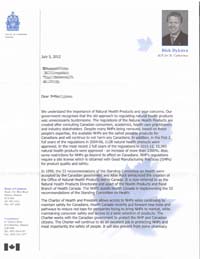