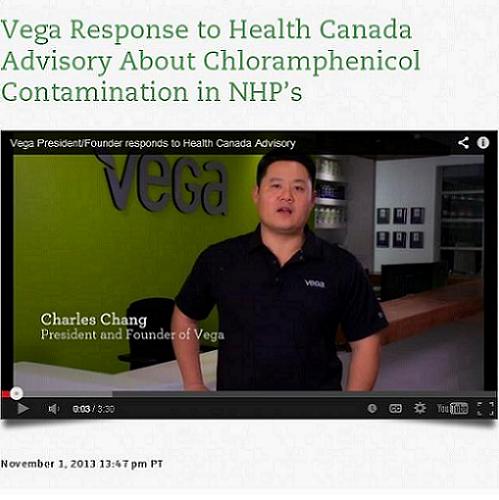 Vega is not recalling two of their products despite Health Canada deeming them a “potentially serious risk” to Canadians. Here’s what Shawn Buckley has to say about their stand:

“I have read Health Canada’s advisory on the Vega products and have watched Vega’s Public Response to Health Canada’s Advisory. Assuming that the information Vega has put in their public response is true (and I have no reason to doubt its veracity) I have to say that I respect Vega for being reasonable. On many occasions I have had to give legal advice to companies facing recall demands by Health Canada. I have learned through experience to never assume that there is an actual health risk. The first thing I have the company do is independent testing which leads to an independent risk analysis. If the product is therapeutic in that there could be a health risk to removing the product, then I usually get medical advice on the risk of removing the product so that a balanced risk analysis can be done. For example, when last year Health Canada was demanding all suppliers of Nattokinase to recall, an independent risk analysis concluded that a recall could lead to harm.

The point of this background is simply to say that in my experience Health Canada’s demands for a recall are often over-blown and at times actually create a health risk. When I watched Vega’s public response it became clear that Vega did exactly what a responsible supplier would do. It did independent testing. It obtained independent advice. It conducted a risk analysis that showed no health risk. People watching the video may not have picked up on the importance of Vega saying it was not shipping any more of the batches of the products in question. This means that Vega, despite there being no health risk, will be taking an economic loss on safe product that it is voluntarily deciding not to sell. They are being very cautious I expect out of concern for the public’s perception.

Based on what I have seen, I respect the efforts Vega has taken and applaud them for being reasonable. I am aware of suppliers who because they fear Health Canada, have conducted recalls when it was not reasonable to do so. I am not trying to minimize Health Canada’s role in trying to identify potential health risks. At the same time, when the regulator is wrong in its call, I appreciate when suppliers act reasonably and in the best interests of their customers.

For anyone who might be concerned that there is a “real” health risk out there, they should know that if there really was a danger Health Canada could go to Court and seek an injunction against Vega. The fact that Health Canada is not doing this likely indicates that they believe the Court would agree with Vega.”